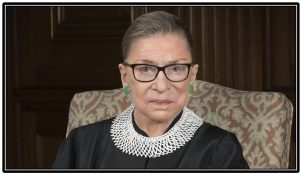 Ruth Bader Ginsburg came of age at a time when women were expected to be dependent on husbands for a living and to focus their lives on domestic pursuits. Despite facing the systematic discrimination against women justified by that ideology, she became a fierce and effective advocate for human rights and women’s empowerment. An intellectually precocious and ambitious young women, she used a strong system of public education and a confidence in her own abilities to build a foundation for an improbable career. She graduated first in her class at Columbia Law School and then had great difficulty finding her first job. When faced with such obstacles, she forged ahead and determined to build a society where women would be able to flourish without restraint.

As a lawyer for the American Civil Liberties Union in the 1970s, she devised a brilliant legal strategy designed to move American law from the paternalism it reserved for women to the establishment of equal treatment under the law or, as she put it, “the constitutional principle of the equal citizenship stature of men and women.” The linchpin of this effort was the radical notion that the word “persons” in the Fourteenth Amendment included women. Her cases sometimes exposed the detrimental treatment of men under discriminatory laws while undercutting the stereotypes that denied women economic opportunities and a place in American public life. In a 1975 case she argued successfully that men who were widowed should get the same survivors’ benefits from Social Security as women so that they might spend more time with their children.

Whether acting as a lawyer or a jurist, she sought empowerment for women, not a spurious protection, and she advanced human rights for other disempowered communities. She believed that women “belong in all places where decisions are being made.” She sought this not only to secure individual rights for women, but to bring to those institutions the insights derived from women’s experiences to build a better world for all. Her broad commitment to social justice reflected her feminism and her recognition that discrimination had real human costs for those denied the full range of dignity, reward, and opportunity.

On the Supreme Court, she became especially well known for her dissents. When the court gutted the Voting Rights Act in 2013, Ginsburg skewered those supporting the majority decision for disregarding the importance of voting rights and diminishing Congress’s power to act on the issue. Their decision, she said, was an act of “hubris.” In the Lilly Ledbetter case, the Supreme Court found that women had only six months from the start of a discriminatory policy to seek remedy for it. Ledbetter only found out she was being paid less than her male peers many years after the discrimination started. In a rare move, Ginsburg read her dissent, noting that “the court does not comprehend, or is indifferent to, the insidious way in which women can be victims of pay discrimination.”

As advocates for pay equity, equal opportunity for all, reproductive rights, and full voter participation in our politics, AAUW and its members have benefitted from and supported the expansion of human rights enabled by Ruth Bader Ginsburg and by the millions who have marched, sacrificed, and spoken for those rights over many decades. A brilliant litigator and jurist, Ginsburg had a profound influence on human rights in American law and life. Whether that legacy will be an enduring one, however, is up to us. AAUW-WA embraces the principles she embodied and pledges to secure and expand her legacy. May we become a credit to her memory.

NOTE*– When a Jewish person dies on Rosh Hashanah, they are said to be a Tzedek/Tzaddeket (feminine), a good and righteous person. The statement of remembrance, “may her memory be for blessing” or, less frequently, “may her memory be a revolution,” acknowledges selfless service to others and encompasses the admonition to others that they follow her example so that they honor her memory by furthering the social good.